Sulfur atoms have 16 electrons and the shell structure is 2.8.6. The ground state electronic configuration of neutral sulfur is [Ne].3s2.3p4 and the term symbol of sulfur is 3P2.

Sulphur (sulfur) is a pale yellow, odourless, brittle solid, which is insoluble in water but soluble in carbon disulphide. Sulphur is essential to life. It is a minor constituent of fats, body fluids, and skeletal minerals.

The spelling of sulphur is "sulfur" in the USA while sulphur is common elsewhere. IUPAC has does not have jurisdiction over language but has decided sulfur is preferred.

Sulphur is found in meteorites, volcanoes, hot springs, and as galena, gypsum, Epsom salts, and barite. It is recovered commercially from "salt domes" along the Gulf Coast of the USA.

Jupiter's moon Io owes its colours to various forms of sulphur. A dark area near the crater Aristarchus on the moon may be a sulphur deposit. Carbon disulphide, hydrogen sulphide, and sulphur dioxide should be handled extremely carefully. Hydrogen sulphide in very small concentrations can be metabolized, but in higher concentrations it can cause death quickly by respiratory paralysis. It is insidious in that it quickly deadens the sense of smell. Sulphur dioxide is a dangerous component in atmospheric air pollution and is one of the factors responsible for acid rain. 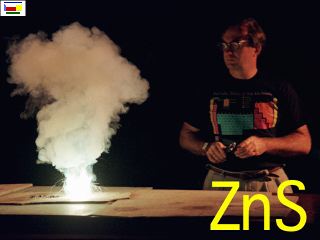 The picture above shows the result from burning a mixture of zinc metal powder and sulphur.

Sulphur is essential to life. It is a minor constituent of fats, body fluids, and skeletal minerals. Sulphur is a key component in most proteins since it is contained in the amino acids methionine and cysteine. Sulphur-sulphur interactions are important in determining protein tertiary structure. Hydrogen sulphide (H2S) replaces H2O in the photosynthesis of some bacteria. In people, hydrogen sulphide in very small concentrations can be metabolized, but in higher concentrations it kills quickly by preventing respiration. It is insidious in that it deadens the sense of smell quickly, meaning victims may be unaware of its presence. It is more toxic than cyanide. Remarkably, sulphuric acid (H2SO4) is present in the digestive fluids of sea squirts (ascidians).

Reactions of sulfur as the element with air, water, halogens, acids, and bases where known.

Isolation: it is not normally necessary to make sulphur in the laboratory as it is so readily available. It is found as the native element in nature and extracted by the Frasch process. This is an interesting process since it means that sulphur can be extracted from underground without mining it. In the Frasch process underground deposits of sulphur are forced to the surface using superheated water and steam (160°C, 16 atmospheres, to melt the sulphur) and compressed air (25 atmospheres). This gives molten sulphur which is allowed to cool in large basins. Purity can reach 99.5%.

The process in energy intensive. Commercial success for this operation depends upon suitable geological conditions as well as access to cheap water and energy.

Hydrogen sulphide, H2S, is an important impurrity in natural gas which must be removed before the gas is used. This is done by an absorption and regeneration process to concentrate the H2S, followed by a catalytic oxidation (Claus process) using porous catalysts such as Al2O3 or Fe2O3.

Over the years the Claus process has been improved and a modified process can yield 98% recovery.

In the laboratory, sulphur can be purified by recrystallisation from solutions in carbon disulphide, CS2. However the resulting crystals are contaminated with solvent, H2S, and SO2. One good way to purify sulphur is to use a quartz heater (700°C) immersed in liquid sulphur. Carbon impurities decompose to form volatile materials of solid carbon, which coat the heater. After a week or so, finishing with a distillation under vacuum, the result is sulphur with a carbon content of about 0.0009%.