Carbon atoms have 6 electrons and the shell structure is 2.4. The ground state electronic configuration of neutral carbon is [He].2s2.2p2 and the term symbol of carbon is 3P0.

Carbon is a Group 14 element and is distributed very widely in nature. It is found in abundance in the sun, stars, comets, and atmospheres of most planets. Carbon is present as carbon dioxide in the atmosphere and dissolved in all natural waters. It is a component of rocks as carbonates of calcium (limestone), magnesium, and iron. The atmosphere of Mars is very thin but what there is contains about 95 % CO2.

Coal, petroleum, and natural gas are chiefly hydrocarbons. Carbon is unique among the elements in the vast number of variety of compounds it can form. Organic chemistry, a 1/112th subset of inorganic chemistry, is the study of carbon and its compounds. While silicon might take the place of carbon in forming a host of related compounds, it is not possible currently to form stable compounds with very long chains of silicon atoms.

Carbon is found free in nature in three allotropic forms: amorphous, graphite, and diamond. Graphite is one of the softest known materials while diamond is one of the hardest. Carbon, as microscopic diamonds, is found in some meteorites. Natural diamonds are found in ancient volcanic "pipes" such as found in South Africa. Diamonds are also recovered from the ocean floor off the Cape of Good Hope. 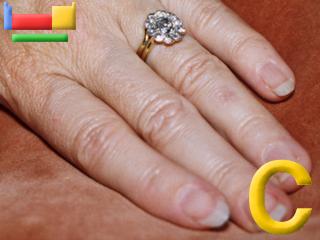 More recently, another form of carbon, buckminsterfullerene, C60, was discovered. This form of carbon is the subject of great interest in research laboratories today.

Pure carbon is available in a number of different forms (allotropes). The most common form of pure carbon is α-graphite. This is also the thermodynamically most stable form. Diamond is a second form of carbon but is much less common. Other forms of carbon include the fullerenes. Whereas diamond and graphite are infinite lattices, fullerenes such as buckminsterfullerene, C60, is a discrete molecular species. Amorphous forms of carbon such as soot and lampblack are materials consisting of very small particles of graphite.

Most graphite is α-graphite and it possesses a layer structure in which each carbon is directly bound to three other carbon atoms at a distance of 141.5 pm. Delocalization in the bonding is evident since the C-C distances are equal and shorter than normal carbon-carbon single bonds (typcally 154 pm). The distance between the layers of carbon atoms is 335.4 pm. In most graphite (α-graphite), the layers of atoms are arranged in an ABABAB... repeat fashion but the β-form (rhombohedral) the stacking is ABCABCABC... although the carbon-carbon distances and the interlayer spacing remains the same as in the α-form. The enthalpy difference between α- and α-graphite is less than 1 kJ mol-1 (0.59 ± 0.17 kJ mol-1. Forms of the heavier elements corresponding to graphite are not known and the structures of silicon, germanium, and grey tin are related to the diamond structure (below). 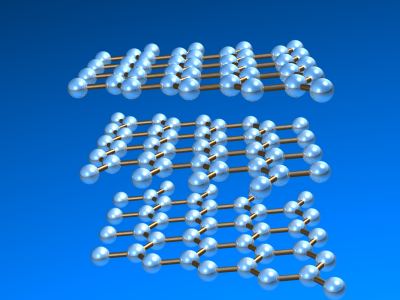 Atom arrangements in the most common allotrops of carbon: α-graphite.

As diamond has a slightly more compact structure its density is greater than that of graphite. The appearance of diamond is well known and it is also one of the hardest materials known. Like graphite, it is relatively unreactive but does burn in air at 600-800°C. Each carbon atom is bound to four neighbours at a distance of 154.45 pm in a tetrahedral fashion and so each diamond crystal is a single giant lattice structure. In principle (and in practice!) graphite may be converted into diamond by the application of heat and pressure. The unit cell of diamond is cubic with a = 356.68 pm. Nearly all diamonds posses this structure but a very small percentage show a hexagonal structure related to wurtzite and these are called lonsdaleite. 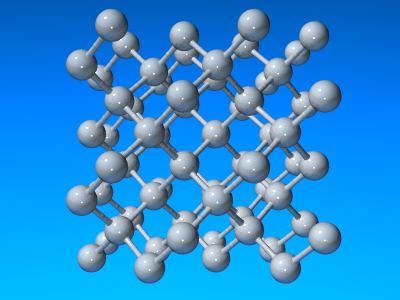 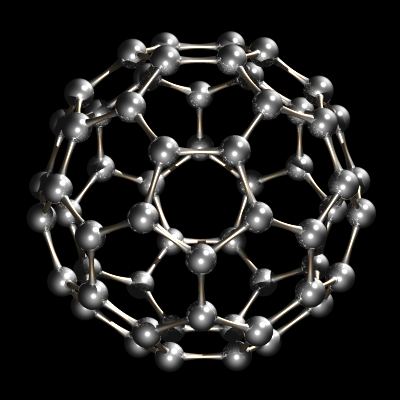 Other fullerenes (closed carbon cages) such as C60 and C84 are known as well, and inded available commercially. The smallest fullerene possible is the dodecahedral C20, consisting of 12 pentagons and no hexagons at all. Nanotubes are related to fullerenes. They are tubes giving the appearance of rolled graphite, although they are made from graphite. They are open ended while fullerenes are closed structures.

One interesting feature of fullerenes is their ability to enclose atoms such as potassium and other alkali metals to make endohedral structures denoted as K@C60.

In 1961 the International Union of Pure and Applied Chemistry (IUPAC) adopted the isotope 12C as the basis for atomic weights. Carbon-14, 14C, an isotope with a half-life of 5730 years, is used to date such materials as wood, archeological specimens, etc. Carbon-13, 13C, is particularly useful for isotopic labelling studies since it is not radioactive, but is a spin I = 1/2 nucleus and therefore a good NMR nucleus.

Carbon is key to life and by definition is present in all organic compounds. The study of life is known as biological chemistry or biochemistry. Ethene gas (C2H4) helps to ripen tomatoes.

Reactions of carbon as the element with air, water, halogens, acids, and bases where known.

Carbon was discovered by known since ancient times although not recognised as an element until much later. in unknown at not known. Origin of name: from the Latin word "carbo" meaning "charcoal".

Carbon isotopes and mainly C-13 is used extensively in many different applications. C-13 is used for instance in organic chemistry research, studies into molecular structures, metabolism, food labeling, air pollution and climate change. C-13 is also used in breath tests to determine the presence of the helicobacter pylori bacteria which causes stomach ulcer. C-13 can also be used for the production of the radioisotope N-13 which is a PET isotope. The C-12 atom has been given the atomic weight of exactly 12.000000000 and is used as the basis upon which the atomic weight of other isotopes is determined.

Isolation: carbon is available in nature as graphite and (to a much lesser extent!) as diamond. Artificial graphite is made by the reaction of coke with silica (SiO2).

Artificial diamonds are made by the application of heat and pressure (> 125 kBar) in the presence of a catalyst such as iron, chromium or platinum. It seems that the metal melts on the carbon surface, the graphite dissolves in the metal film, and the less soluble diamond precipitates out. The introduction of nitrogen as an impurity gives yellowish diamonds while boron impurities give bluish colours.

A new form of carbon, buckminsterfullerene with formula C60 is formed in the treatment of graphite by lasers and is now commercially available in small quantities.