Indium is a very soft, silvery-white metal with a brilliant lustre. The pure metal gives a high-pitched "scream" when bent. It wets glass, as does gallium. It is useful for making low-melting alloys. An alloy of 24% indium and 76% gallium is liquid at room temperature. Canada produces the majority of of the world's supply of indium. 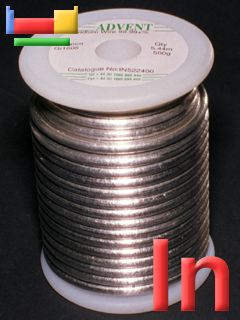 Small and large samples of indium wire like this, as well as foil, and sheet, can be purchased from Advent Research Materials via their web catalogue.

Indium has no biological role. In small doses it is said to stimulate the metabolism.

Reactions of indium as the element with air, water, halogens, acids, and bases where known.

Indium was discovered by Ferdinand Reich, Hieronymus Theodor Richter in 1863 at Germany. Origin of name: named after the indigo line in its atomic spectrum.

Isolation: indium would not normally be made in the laboratory as it is commercially available. Indium is a byproduct of the formation of lead and zinc. Indium metal is isolated by the electrolysis of indium salts in water. Further processes are required to make very pure indium for electronics purposes.