Osmium metal is lustrous, bluish white, extremely hard, and brittle even at high temperatures. It has the highest melting point and lowest vapour pressure of the platinum group. The metal is very difficult to fabricate, but the powder can be sintered in a hydrogen atmosphere at a temperature of 2000°C. The solid metal is not affected by air at room temperature, but the powdered or spongy metal slowly gives off osmium tetroxide, which is a powerful oxidising agent and has a strong smell. The tetroxide is highly toxic, and boils at 130°C (760 mm). Concentrations in air as low as 10-7 g m-3 can cause lung congestion, skin damage, or eye damage. 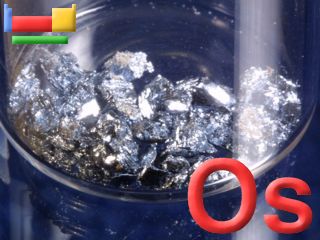 Osmium has no biological role. Osmium oxide, OsO4, is highly toxic, and boils at 130°C (760 mm). Concentrations in air as low as 10-7 g m-3 can cause lung congestion, skin damage, and severe eye damage.

Reactions of osmium as the element with air, water, halogens, acids, and bases where known.

Osmium was discovered by Smithson Tennant in 1803 at England. Origin of name: from the Greek word "osme" meaning "smell".

Isolation: it would not normally be necessary to make a sample of osmium in the laboratory as the metal is available, at a price, commercially. The industrial extraction of osmium is complex as the metal occurs in ores mixed with other metals such as ruthenium, rhodium, palladium, silver, platinum, and gold. Sometimes extraction of the precious metals such as iridium, rhodium, platinum and palladium is the main focus of a partiular industrial operation while in other cases it is a byproduct. The extraction is complex because of the other metals present and only worthwhile since osmium is useful as a specialist metal and is the basis of some catalysts in industry.

Preliminary treatment of the ore or base metal byproduct is required to remove silver, gold, palladium, and platinum. The residue is melted with sodium bisulphate (NaHSO4) and the resulting mixture extracted with water to give a solution containing rhodium sulphate, Rh2(SO4)3. The insoluble residue contains the osmium. The residue is melted with Na2O2 and extracted into water to extract the ruthenium and osmium salts (including [RuO4]2- and [OsO4(OH)2]2-). The residue contains iridium oxide, IrO2. Reaction of the salt with chlorine gas gives the volatile oxides RuO4 and OsO4. The osmium oxide is dissolved by treatment with alcoholic sodium hydroxide to form Na2[OsO2(OH)4], and the osmium precipiated out as pure OsCl2O2(NH3)4 by treatment with NH4Cl. Evaporation to dryness and burning under hydrogen gas gives pure osmium.