Sodium atoms have 11 electrons and the shell structure is 2.8.1. The ground state electronic configuration of neutral sodium is [Ne].3s1 and the term symbol of sodium is 2S1/2.

Sodium is a Group 1 element (or IA in older labelling styles). Group 1 elements are often referred to as the "alkali metals". The chemistry of sodium is dominated by the +1 ion Na+. Sodium salts impart a characteristic orange/yellow colour to flames and orange street lighting is orange because of the presence of sodium in the lamp.

Soap is generally a sodium salt of fatty acids. The importance of common salt to animal nutrition has been recognized since prehistoric times. The most common compound is sodium chloride, (table salt). 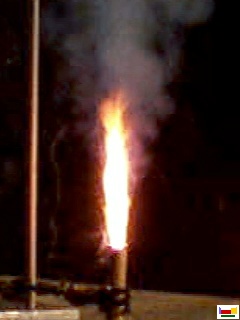 The picture above shows the colour arising from adding common salt (NaCl) to a burning mixture of potassium chlorate and sucrose. 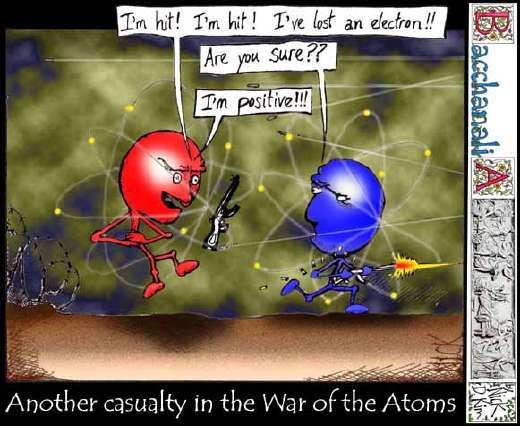 The chemistry of sodium is dominated by electron loss to form Na+. Cartoon by Nick D Kim ([Science and Ink], used by permission).

Sodium is a vital element. The human diet must contain a sensible amount of sodium. The sodium cation is the main extracellular (outside cells) cation in animals and is important for nerve function in animals.

The importance of sodium as salt in the diet was recognized well before sodium itself was understood to be an element. This recognition formed the basis of trading of salt deposits lining the Dead Sea in biblical times by the Romans. Prolonged sweating results in sodium ion loss in sweat and it is most important that the sodium ion is replaced through proper diet.

Reactions of sodium as the element with air, water, halogens, acids, and bases where known.

Sodium was discovered by Sir Humphrey Davy in 1807 at England. Origin of name: from the English word "soda" (the origin of the symbol Na comes from the Latin word "natrium").

Isolation: sodium would not normally be made in the laboratory as it is so readily available commercially. All syntheses require an electrolytic step as it is so difficult to add an electron to the poorly electronegative sodium ion Na+.

Sodium is present as salt (sodium chloride, NaCl) in huge quantities in underground deposits (salt mines) and seawater and other natural waters. It is easily recovered as a solid by drying.

Sodium chloride has a high melting point (> 800°C) meaning that it sould be expensive to melt it in order to carry out the electrolysis. However a mixture of NaCl (40%) and calcium chloride, CaCl2 (60%) melts at about 580°C and so much less energy and so expense is required for the electrolysis.

The electrolysis is carried out as a melt in a "Downs cell". In practice, the electrolysis process produces calcium metal as well but this is solidified in a collection pipe and returned back to the melt.