Samarium atoms have 62 electrons and the shell structure is 2.8.18.24.8.2. The ground state electronic configuration of neutral samarium is [Xe].4f6.6s2 and the term symbol of samarium is 7F0.

Samarium has a bright silver lustre and is reasonably stable in air. It ignites in air at 150°C. It is a rare earth metal. It is found with other rare earth elements in minerals including monazite and bastnaesite and is used in electronics industries. 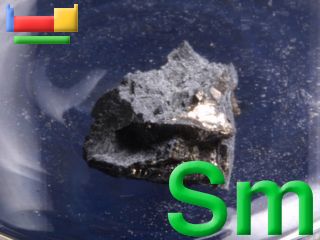 Samarium has no biological role but is said to stimulate the metabolism.

Reactions of samarium as the element with air, water, halogens, acids, and bases where known.

Samarium was discovered by Paul Emile Lecoq de Boisbaudran in 1879 at France. Origin of name: named after "Samarskite" (a mineral).

Isolation: samarium metal is available commercially so it is not normally necessary to make it in the laboratory, which is just as well as it is difficult to isolate as the pure metal. This is largely because of the way it is found in nature. The lanthanoids are found in nature in a number of minerals. The most important are xenotime, monazite, and bastnaesite. The first two are orthophosphate minerals LnPO4 (Ln deonotes a mixture of all the lanthanoids except promethium which is vanishingly rare) and the third is a fluoride carbonate LnCO3F. Lanthanoids with even atomic numbers are more common. The most comon lanthanoids in these minerals are, in order, cerium, lanthanum, neodymium, and praseodymium. Monazite also contains thorium and ytrrium which makes handling difficult since thorium and its decomposition products are radioactive.

Pure samarium is available through the electrolysis of a mixture of molten SmCl3 and NaCl (or CaCl2) in a graphite cell which acts as cathode using graphite as anode. The other product is chlorine gas.