Gallium atoms have 31 electrons and the shell structure is 2.8.18.3. The ground state electronic configuration of neutral gallium is [Ar].3d10.4s2.4p1 and the term symbol of gallium is 2P1/2.

Gallium is the only metal, except for mercury, caesium, and rubidium, which can be liquid near room temperatures; this makes possible its use in high-temperature thermometers. It has one of the longest liquid ranges of any metal and has a low vapour pressure even at high temperatures.

Ultra-pure gallium has a beautiful, silvery appearance, and the solid metal exhibits a conchoidal fracture similar to glass. The metal expands on solidifying; therefore, it should not be stored in glass or metal containers, as they may break as the metal solidifies.

High-purity gallium is attacked only slowly by mineral acids. Gallium arsenide is capable of converting electricity directly into coherent light and gallium arsenide is a key component of LEDs (light emitting diodes). In the 1990s gallium nitride (GaN) was discovered to emit blue light in light-emitting diodes (LEDs). As red and green LEDs were already known, this meant that red green, and blue LEDS could be used in full-colour LED displays while white LEDs and blue laser devices became possible as well. 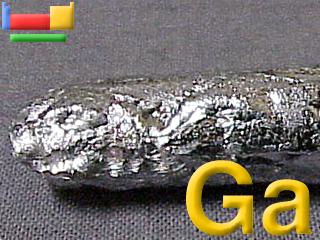 Gallium apparently has no biological role but is said to stimulate the metabolism. Gallium compounds appear not to be particularly toxic.

Reactions of gallium as the element with air, water, halogens, acids, and bases where known.

Gallium has two stable isotopes and both are used in nuclear medicine and physics. Ga-69 is used for production of the radioisotope Ge-68. This isotope is used for so-called Ge-68/Ga-68 generators. The Ga-68 that is created from the decay of Ge-68 is used as a PET isotope. Ga-71 has been used to study the behavior of solar neutrinos and it is also used in NMR studies.

Isolation: gallium is normally a byproduct of the manufacture of aluminium. The purification of bauxite by the Bayer process results in concentration of gallium in the alkaline solutions from an aluminium:gallum ratio from 5000 to 300. Electrolysis using a mercury electrode gives a further concentration and further electrolysis using a stainless steel cathode of the resulting sodium gallate affords liquid gallium metal.