Bismuth is a white, crystalline, brittle metal with a pinkish tinge. Bismuth is the most diamagnetic of all metals, and the thermal conductivity is lower than any metal, except mercury. It has a high electrical resistance, and has the highest Hall effect of any metal (that is, the greatest increase in electrical resistance when placed in a magnetic field). 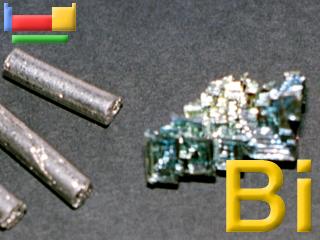 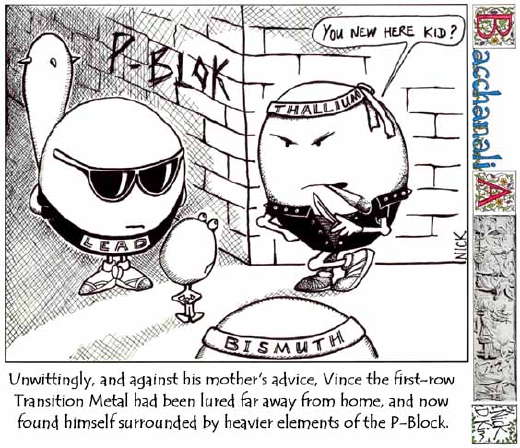 Bismuth has no biological role. However it has been used for some time as a medicine (tripotassium dicitratobismuthate) for treatment of stomach upsets. In combination with antibiotics it is now used for treatment of some stomach ulcers. It is also to be found in haemorrhoid creams such as Anusol cream and Hemocaneas as bismuth oxide and in Anusol ointment as bismuth subgallate.

Reactions of bismuth as the element with air, water, halogens, acids, and bases where known.

Bismuth was discovered by known since ancient times in unknown at not known. Origin of name: from the German word "bisemutum".

Isolation: it is not normally necessary to make bismuth in the laboratory as it is available commercially. Bismuth is found in nature largely as bismite (Bi2O3), bismuthinite (Bi2S3), and bismutite [(BiO)2CO3]. However it is generally made as a byproduct of copper, lead,tin, silver, gold, and zinc plants. The final step involves a reduction of the oxide by charcoal.