Molybdenum atoms have 42 electrons and the shell structure is 2.8.18.13.1. The ground state electronic configuration of neutral molybdenum is [Kr].4d5.5s1 and the term symbol of molybdenum is 7S3.

Molybdenum is a silvery-white, hard, transition metal. Scheele discovered it in 1778. It was often confused with graphite and lead ore. Molybdenum is used in alloys, electrodes and catalysts. The World War 2 German artillery piece called "Big Bertha" contains molybdenum as an essential component of its steel. 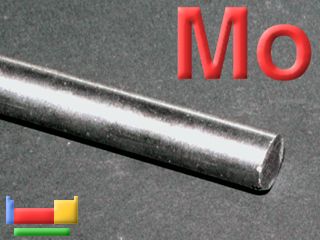 Molybdenum is a necessary element, apparently for all species. Only very small amounts are required. Molybdenum plays a role in nitrogen fixation, (a process by which the normally unreactive nitrogen gas is turned into other compounds) enzymes, and nitrate reduction enzymes.

Reactions of molybdenum as the element with air, water, halogens, acids, and bases where known.

Molybdenum was discovered by Carl William Scheele in 1781 at Sweden. Origin of name: from the Greek word "molybdos" meaning "lead".

Isolation: it is not normally necessary to make samples of molybdenum metal in the laboratory since it is readily available commercially. Industrially, its extraction is sometimes linked to copper production. The normal process is for the sulphide MoS2 to be "roasted" to form the oxide MoO3. This is often used directly in the steel industry.

Pure samples of the metal are available by first dissolving the oxide in ammonium hydroxide to make ammonium molybdate, (NH4)2[MO4], and thenreduction of the molybdate with hydrogen gas to form the metal.