Iodine is a bluish-black, lustrous solid. It volatilises at ambient temperatures into a pretty blue-violet gas with an irritating odour.

It forms compounds with most elements, but is less reactive than the other halogens, which displace it from iodides. Iodine exhibits some metallic-like properties. It dissolves readily in chloroform, carbon tetrachloride, or carbon disulphide to form beautiful purple solutions. It is only slightly soluble in water. Iodine compounds are important in organic chemistry and very useful in medicine and photography. Lack of iodine is the cause of goitre (Derbyshire neck). The deep blue colour with starch solution is characteristic of the free element. It is assimilated by seaweeds from which it may be recovered, and is found in Chilean saltpetre, caliche, old salt brines, and salt wells. 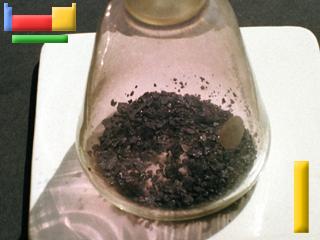 In nature, iodine exists as iodide ions, I-, and it is as iodide that it is taken into our bodies. Iodine is an essential component of the human diet and in fact appears to be the heaviest required element in the diet. Iodine compounds are useful in medicine.

Lack of iodine in the diet is a cause of goitre (Derbyshire neck). This condition is rare now as table salt is dosed with a little iodide.

Reactions of iodine as the element with air, water, halogens, acids, and bases where known.

Iodine was discovered by Bernard Courtois in 1811 at France. Origin of name: from the Greek word "iodes" meaning "violet".

Isolation: iodine is available commercially so it is not normally necessary to make it in the laboratory. Iodine occurs in seawater but in much smaller quantities than chloride or bromide. As for bromine, with suitable sources of brine, it is recovered commercially through the treatment of brine with chlorine gas and flushing through with air. In this treatment, iodide is oxidized to iodine by the chlorine gas.

Small amounts of iodine can be made through the reaction of solid sodium iodide, NaI, with concentrated sulphuric acid, H2SO4. The first stage is formation of HI, which is a gas, but under the reaction conditions some of the HI is oxidized by further H2SO4 to form iodine and sulphur dioxide.