Barium atoms have 56 electrons and the shell structure is 2.8.18.18.8.2. The ground state electronic configuration of neutral barium is [Xe].6s2 and the term symbol of barium is 1S0.

Barium is a metallic element, soft, and when pure is silvery white like lead. The metal oxidises very easily and it reacts with water or alcohol. Barium is one of the alkaline-earth metals. Small amounts of barium compounds are used in paints and glasses. 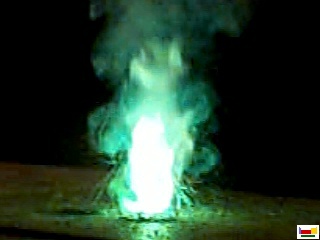 Barium salts impart green colours to flames. The picture above shows the colour arising from adding barium chlorate (BaClO3) to a burning mixture (only to be carried out by a professionally qualified chemist). 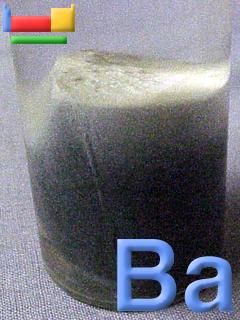 Barium has no biological role. The British Pharmaceutical Codex from 1907 indicates that barium chloride ["barii chloridum", BaCl2.2H2O] has a stimulant action on the heart and other muscles. It was said that it "raises blood pressure by constricting the vessels and tends to empty the intestines, bladder, and gall bladder". Its poisonous nature was also pointed out. Barium sulphide (BaS) was used as a depilatory agent (removes hair). Barium sulphate (BaSO4) is insoluble and used for body imaging (barium meal).

Reactions of barium as the element with air, water, halogens, acids, and bases where known.

Barium was discovered by Sir Humphrey Davy in 1808 at England. Origin of name: from the Greek word "barys" meaning "heavy".

Isolation: barium metal is available commercially and there is normally no need to make it in the laboratory. Commercially, it is made on small scale by the electrolysis of molten barium chloride, BaCl2.

Barium metal can also be islated from the reduction of barium oxide, BaO, with aluminium.