Metallic cerium is prepared by reduction techniques, such as by reducing cerous fluoride with calcium, or by electrolysis of molten cerous chloride or other cerous halides.

Cerium is an iron-grey lustrous metal. It is malleable, and oxidises very readily at room temperature, especially in moist air. Except for europium, cerium is the most reactive of the rare-earth metals. It slowly decomposes in cold water, and rapidly in hot water. Alkali solutions and dilute and concentrated acids attack the metal rapidly. The pure metal may ignite when scratched with a knife.

It is the most abundant of the rare earth metals and is found in minerals including allanite, monazite, cerite, and bastnaesite. There are large deposits found in India, Brazil and the USA. 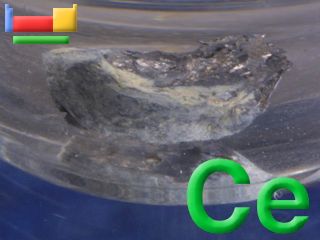 Cerium has no biological role but is said to stimulate the metabolism. The British Pharmaceutical Codex from 1907 indicates that cerium nitrate ["cerii nitras", Ce(NO3)3] was used to treat dyspepsia, pyrosis, and vomiting (especially "vomiting of pregnancy") in doses of 0.05-0.3 g ("1 to 5 grains") and that cerium salts have pharmacological properties similar to those of bismuth. The oxalate ["cerii oxalas", Ce2(C2O4)3.9H2O] was also used for "chronic vomiting, especially the vomiting of pregnancy." The doses were 0.6 g, three times a day for several days if necessary.

Reactions of cerium as the element with air, water, halogens, acids, and bases where known.

Cerium was discovered by Wilhelm von Hisinger, Jöns Jacob Berzelius, Martin Klaproth in 1803 at Sweden, Germany. Origin of name: named after the asteroid Ceres which discovered in 1801, 2 years before the element.

There do not appear to be many applications for Ce isotopes although Ce-140 is used for the production of the radioisotope Ce-141 which is used for medical research purposes.

Isolation: cerium metal is available commercially so it is not normally necessary to make it in the laboratory, which is just as well as it is difficult to isolate as the pure metal. This is largely because of the way it is found in nature. The lanthanoids are found in nature in a number of minerals. The most important are xenotime, monazite, and bastnaesite. The first two are orthophosphate minerals LnPO4 (Ln deonotes a mixture of all the lanthanoids except promethium which is vanishingly rare) and the third is a fluoride carbonate LnCO3F. Lanthanoids with even atomic numbers are more common. The most comon lanthanoids in these minerals are, in order, cerium, lanthanum, neodymium, and praseodymium. Monazite also contains thorium and ytrrium which makes handling difficult since thorium and its decomposition products are radioactive.

For many purposes it is not particularly necessary to separate the metals, but if separation into individual metals is required, the process is complex. Initially, the metals are extracted as salts from the ores by extraction with sulphuric acid (H2SO4), hydrochloric acid (HCl), and sodium hydroxide (NaOH). The ceric ion, Ce(IV) is more easily hydrolysed than the lanthanide (III) ions and therefore precipitates as a salt upon treatment with an oxidizing agent such as KMnO4.

Pure cerium is available through the electrolysis of a mixture of molten CeCl3 and NaCl (or CaCl2) in a graphite cell which acts as cathode using graphite as anode. The other product is chlorine gas.