When freshly exposed to air, thallium exhibits a metallic lustre, but soon develops a bluish-grey tinge, resembling lead in appearance. A heavy oxide builds up on thallium if left in air, and in the presence of water the hydroxide is formed. The metal is very soft and malleable. It can be cut with a knife.

The element and its compounds are toxic and should be handled carefully. Thallium may cause cancer. 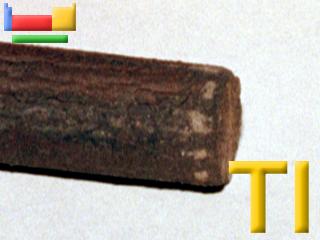 Thallium has no biological role. Thallium compounds are extremely toxic. Their effects are cumulative and they can be absorbed though the skin. Thallium poisoning takes several days to act and it affects the nervous system.

Reactions of thallium as the element with air, water, halogens, acids, and bases where known.

Thallium was discovered by Sir William Crookes in 1861 at England. Origin of name: from the Greek word "thallos" meaning "green twig" or green shoot.

Thallium has two stable isotopes and one of these, Tl-203, is used to produce one of the (workhorses( of nuclear medicine: Tl-201. Tl-201 is used extensively for imaging and in particular for perfusion tests of the myocardium. These tests are done to determine the damage to the heart from a heart attack or from heart diseases. Tl205 has been proposed as an alternative target for the production of Tl-201. Tl-205 is also used in nuclear magnetic resonance research.

Isolation: thallium metal would not normally be made in the laboratory as it is available commercially. Crude thallium is present as a component in flue dust along with arsenic, cadmium, indium, germanium, lead, nickel, selenium, tellurium, and zinc. This is done by dissolving in dilute acid, precipitating out lead sulphate, and then adding HCl to precipitate thallium chloride, TlCl. Further purification can be achieve by electrolysis of soluble thallium salts.