Pure tungsten is a steel-gray to tin-white metal. Tungsten has the highest melting point and lowest vapour pressure of all metals, and at temperatures over 1650°C has the highest tensile strength. The metal oxidises in air and must be protected at elevated temperatures. It has excellent corrosion resistance and is attacked only slightly by most mineral acids. 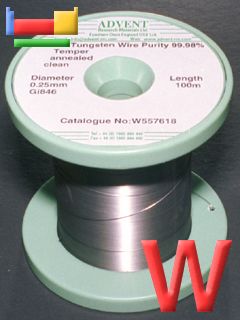 Small and large samples of tungsten wire like this, as well as foil, sheet, wire straight cut lengths, insulated wire, and mesh (and tungsten alloys in wire form), can be purchased from Advent Research Materials via their web catalogue.

Reactions of tungsten as the element with air, water, halogens, acids, and bases where known.

Tungsten was discovered by Fausto and Juan Jose de Elhuyar in 1783 at Spain. Origin of name: from the Swedish words "tung sten" meaning "heavy stone" (the origin of the symbol W is "wolfram ", named after the tungsten mineral wolframite).