Caesium atoms have 55 electrons and the shell structure is 2.8.18.18.8.1. The ground state electronic configuration of neutral caesium is [Xe].6s1 and the term symbol of caesium is 2S1/2.

Caesium is known as cesium in the USA.

The metal is characterised by a spectrum containing two bright lines in the blue (accounting for its name). It is silvery gold, soft, and ductile. It is the most electropositive and most alkaline element. Caesium, gallium, and mercury are the only three metals that are liquid at or around room temperature. Caesium reacts explosively with cold water, and reacts with ice at temperatures above -116°C. Caesium hydroxide is a strong base and attacks glass. 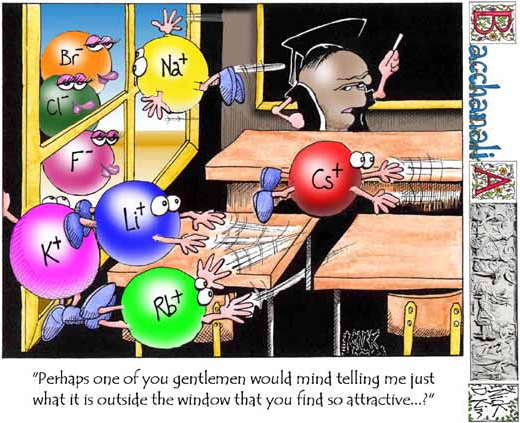 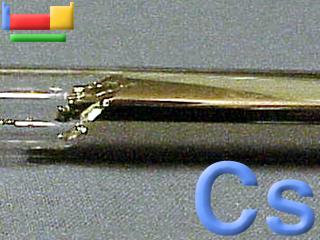 Caesium (cesium in USA) has no biological role. However it is capable of replacing potassium in the body to some extent because of its chemical similarity. Ingestion of any caesium compounds is therefore to be avoided. Because of this similarity, the isotopes 134Cs and 137Cs (present in the biosphere in small amounts as a result of radiation leaks) are very toxic. Rats fed caesium in place of potassium in their diet die.

Reactions of caesium as the element with air, water, halogens, acids, and bases where known.

Caesium was discovered by Gustav Kirchhoff, Robert Bunsen in 1860 at Germany. Origin of name: from the Latin word "caesius" meaning "sky blue" or "heavenly blue".

Isolation: caesium (cesium in USA) would not normally be made in the laboratory as it is available commercially. All syntheses require an electrolytic step as it is so difficult to add an electron to the poorly electronegative caesium ion Cs+.

Caesium is not made by the same method as sodium as might have been expected. This is because the caesium metal, once formed by electrolysis of liquid caesium chloride (CsCl), is too soluble in the molten salt.

Instead, it is made by the reaction of metallic sodium with hot molten caesium chloride.

This is an equilbrium reaction and under these conditions the caesium is highly volatile and removed from the system in a form relatively free from sodium impurities, allowing the reaction to proceed. It can be purified by distillation.