Germanium atoms have 32 electrons and the shell structure is 2.8.18.4. The ground state electronic configuration of neutral germanium is [Ar].3d10.4s2.4p2 and the term symbol of germanium is 3P0.

Germanium is a gray-white semi-metal, and in its pure state is crystalline and brittle, retaining its lustre in air at room temperature. It is a very important semiconductor material. Zone-refining techniques have led to production of crystalline germanium for semiconductor use with an impurity of only one part in 10-10.

Certain germanium compounds have a low mammalian toxicity, but a clear activity against certain bacteria, which makes them of interest as chemotherapeutic agents. 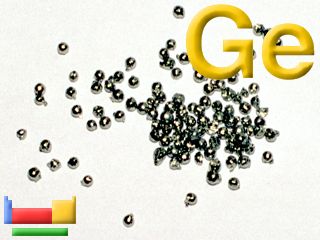 Germanium has no biological role but is said to stimulate the metabolism.

Reactions of germanium as the element with air, water, halogens, acids, and bases where known.

Germanium was discovered by Clemens Winkler in 1886 at Germany. Origin of name: from the Latin word "Germania" meaning "Germany".

Isolation: there is normally no need to make germanium in the laboratory as it is readily available commercially. Germanium is available through the treatment of germanium dioxide, GeO2, with carbon or hydrogen. The extraction of germanium from flue dust is complex because of the difficulty in separating it from zinc, which is also present.

Very pure germanium can be made by the reaction of GeCl4 with hydrogen.