Oxygen atoms have 8 electrons and the shell structure is 2.6. The ground state electronic configuration of neutral oxygen is [He].2s2.2p4 and the term symbol of oxygen is 3P2.

Oxygen is a Group 16 element. While about one fifth of the atmosphere is oxygen gas, the atmosphere of Mars contains only about 0.15% oxygen. Oxygen is the third most abundant element found in the sun, and it plays a part in the carbon-nitrogen cycle, one process responsible for stellar energy production. Oxygen in excited states is responsible for the bright red and yellow-green colours of the aurora. About two thirds of the human body, and nine tenths of water, is oxygen. The gas is colourless, odourless, and tasteless. Liquid and solid oxygen are pale blue (see picture above) and strongly paramagnetic (contains unpaired electrons).

Ozone (O3) is the second allotrope of oxygen. It is formed from electrical discharges or ultraviolet light acting on O2. It is an important component of the atmosphere (in total amounting to the equivalent of a layer about 3 mm thick at ordinary pressures and temperatures) which is vital in preventing harmful ultraviolet rays of the sun from reaching the earth's surface. Aerosols in the atmosphere have a detrimental effect on the ozone layer. Large holes in the ozone layer are forming over the polar regions and these are increasing in size annually. Paradoxically, ozone is toxic! Undiluted ozone is bluish in colour. Liquid ozone is bluish-black, and solid ozone is violet-black.

Oxygen is very reactive and oxides of most elements are known. It is essential for respiration of all plants and animals and for most types of combustion.

Oxygen occurs as two allotropes, dioxygen and trioxygen (ozone). Dioxygen, O2, is a diatomic colourless oxidizing gas but a pale blue liquid upon condensation. It is paramagnetic (that is, possesses unpaired electrons) as a result of two unpaired electrons in the two O2 π* orbitals. It makes up about a fifth of the earth's atmosphere.

Ozone, O3, is a very reactive blue gas characterized by a pungent "electrical" smell (the name ozone derives from the Greek ozein, to smell). Ozone molecules are bent with a bond angle of about 117° in the gas phase. Ozone condenses to a blue-black liquid (boiling point -111.9°C and further cooling results in a dark violet-black solid (melting point -192.5°C.

Ozone is unstable thermodynamcally with respect to dioxygen but only converts to O2 slowly in the absence of a catalyst. 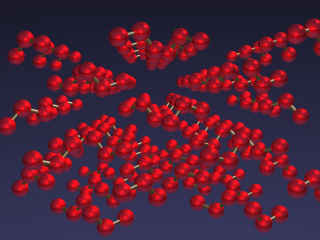 Arrangements of ozone molecules, O3, in the solid state.

Ozone is present in the atmosphere as well, but at amuch lower level than O2. Ozone is a key component of the upper atmosphere because it has the ability to absorb ultraviolet light in the 220-290 nm range, so preventing harmful rays at those wavelengths reaching the earth's surface. These days, various factors deplete the ozone layer in the upper atmosphere and the "ozone holes" in the northern and southern polar regions are of particular concern.

Oxygen atoms are present in water (H2O) and water is essential to all life. Oxygen and is present in many organic compounds. Most organisms use oxygen for respiration. While oxygen (O2) is necessary for life, oxygen as ozone (O3) is highly toxic. On the other hand, ozone is an important component of the atmosphere (the ozone layer) and helps to shield us from harmful ultraviolet rays from the sun.

Reactions of oxygen as the element with air, water, halogens, acids, and bases where known.

Oxygen was discovered by Joseph Priestley, Carl Scheele in 1774 at England and Sweden. Origin of name: from the Greek words "oxy genes" meaning "acid" (sharp) and "forming" (acid former).

All three Oxygen isotopes have medical applications. O-16 is used in the production of radioactive N-13 which is used for PET imaging and myocardial perfusion. O-17 can be used as a tracer in the study of cerebral oxygen utilization. Large quantities of O-18 are used for the production of F-18. F-18 is used to produce 2-[18F]fluoro-2-deoxyglucose (FDG) which is used as a tracer in positron emission tomography or PET. Millions of these FDG-PET medical procedures are performed annually to investigate a range of diseases in various human organs.

Ozone (O3), the other allotrope of oxygen, is made by silent electric discharge through oxygen flowing through a cooled system. This can give up to a10% proportion of ozone and the ozone is purified by fractional liquefaction (with care!).