Protactinium atoms have 91 electrons and the shell structure is 2.8.18.32.20.9.2. The ground state electronic configuration of neutral protactinium is [Rn].5f2.6d1.7s2 and the term symbol of protactinium is 4K11/2. 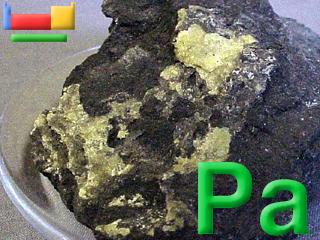 This sample of uraninite contains some about 10-6 grammes of actinium at any one time. Image adapted with permission from Prof James Marshall's (U. North Texas, USA) Walking Tour of the elements CD.

Protactinium has no biological role.

Reactions of protactinium as the element with air, water, halogens, acids, and bases where known.