Boron atoms have 5 electrons and the shell structure is 2.3. The ground state electronic configuration of neutral boron is [He].2s2.2p1 and the term symbol of boron is 2P1/2.

Boron is a Group 13 element that has properties which are borderline between metals and non-metals (semimetallic). It is a semiconductor rather than a metallic conductor. Chemically it is closer to silicon than to aluminium, gallium, indium, and thallium.

Crystalline boron is inert chemically and is resistant to attack by boiling HF or HCl. When finely divided it is attacked slowly by hot concentrated nitric acid. 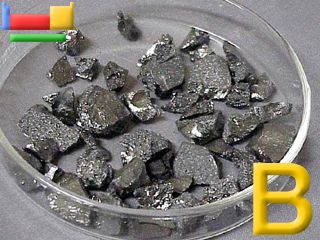 Boron is probably not required in the diet of humans but it might be a necessary "ultratrace" element. Boron is required by green algae and higher plants.

Reactions of boron as the element with air, water, halogens, acids, and bases where known.

Boron was discovered by Sir Humphrey Davy, Joseph-Louis Gay-Lussac, L.J. Thénard in 1808 at England and France. Origin of name: from the Arabic word "buraq" and the Persian word "burah" .

Both isotopes of Boron, B-10 and B-11, are used extensively in the nuclear industry. B-10 is used in the form of boric acid as a chemical shim in pressurized water reactors while in the form of sodium pentaborate it is used for standby liquid control systems in boiling water reactors. B-11 can be used as a neutron reflector. Outside the nuclear industry both isotopes are used as food label to study boron metabolism. B-10 is also used in so-called boron neutron capture therapy (BNCT). Both B-10 and B-11 can be used for the production of two radioisotopes: C-11 and N-13.

Isolation: it is not normally necessary to make boron in the laboratory and it would normally be purchased as it is available commercially. The most common sources of boron are tourmaline, borax [Na2B4O5(OH)4.8H2O], and kernite [Na2B4O5(OH)4.2H2O]. It is difficult to obtain pure. It can be made through the magnesium reduction of the oxide, B2O3. The oxide is made by melting boric acid, B(OH)3, which in turn is obtained from borax.

Samm amounts of high purity boron are available through the thermal decomposition of compounds such as BBr3 with hydrogen gas using a heated tantalum wire. Results are better with hot wires at tmeperatures over 1000°C.