Manganese atoms have 25 electrons and the shell structure is 2.8.13.2. The ground state electronic configuration of neutral manganese is [Ar].3d5.4s2 and the term symbol of manganese is 6S5/2.

Manganese metal is gray-white, resembling iron, but is harder and very brittle. The metal is reactive chemically, and decomposes cold water slowly. Manganese is widely distributed throughout the animal kingdom. It is an important trace element and may be essential for utilisation of vitamin B. Manganese is present in quantity the floor of oceans. It is an important component of steel. 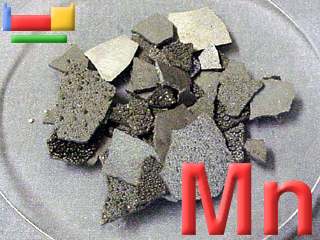 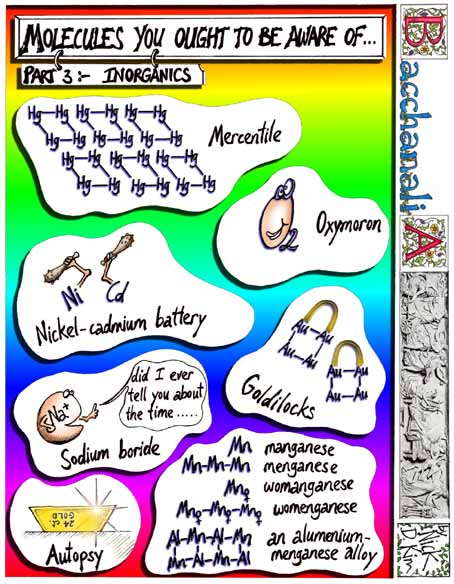 Manganese compounds are essential to life. They are essential for the action of some enzymes. Soil deficiencies lead to infertility in mammals and to bone malformation in growing chicks.

Reactions of manganese as the element with air, water, halogens, acids, and bases where known.

Manganese was discovered by Johann Gahn in 1774 at Sweden. Origin of name: from the Latin word "magnes" meaning "magnet", or "magnesia nigri" meaning "black magnesia" (MnO2).

Isolation: it is not normally necessary to make manganese in the laboratory as it is available commercially. Nearly all manganese produced commercially is used in the steel industry as ferromanganese. This made by the reduction of iron oxide, Fe2O3, and managanese dioxide, MnO2, in appropriate proportions with carbon (as coke) in a blast furnace. Pure manganese is available through the electrolysis of manganese sulphate, MnSO4,