Robert Boyle (1627-1691; English chemist and physicist) published a paper ("New experiments touching the relation betwixt flame and air") in 1671 in which he described the reaction between iron filings and dilute acids which results in the evolution of gaseous hydrogen ("inflammable solution of Mars" [iron]).

However it was only much later that it was recognized as an element by Henry Cavendish (1731-1810; an English chemist and physicist who also independently discovered nitrogen) in 1766 when he collected it over mercury and described it as "inflammable air from metals". Cavendish described accurately hydrogen's properties but thought erroneously that the gas originated from the metal rather than from the acid. Hydrogen was named by Lavoisier.

Deuterium gas (2H2, often written D2), made up from deuterium, a heavy isotope of hydrogen, was discovered in 1931 by Harold Urey, a professor of chemistry at Chicago and California (both USA).

Sometime prior to the autumn of 1803, the Englishman John Dalton was able to explain the results of some of his studies by assuming that matter is composed of atoms and that all samples of any given compound consist of the same combination of these atoms. Dalton also noted that in series of compounds, the ratios of the masses of the second element that combine with a given weight of the first element can be reduced to small whole numbers (the law of multiple proportions). This was further evidence for atoms. Dalton's theory of atoms was published by Thomas Thomson in the 3rd edition of his System of Chemistry in 1807 and in a paper about strontium oxalates published in the Philosophical Transactions. Dalton published these ideas himself in the following year in the New System of Chemical Philosophy. The symbol used by Dalton for hydrogen is shown below. [See History of Chemistry, Sir Edward Thorpe, volume 1, Watts & Co, London, 1914.]

In 1839 a British scientist Sir William Robert Grove carried out experiments on electrolysis. He used electricity to split water into hydrogen and oxygen. He then argued one should be able to reverse the electrolysis and so generate electricity from the reaction of oxygen with hydrogen. He enclosed platinum strips in separate sealed bottles, one containing hydrogen and one oxygen. When the containers were immersed in dilute sulphuric acid a current indeed flowed between the two electrodes and water was formed in the gas bottles. He linked several of these devices in series to increase the voltage produced in a gas battery. Later the term fuel cell was used by the chemists Ludwig Mond and Charles Langer.

In 1932 Dr Francis Thomas Bacon, an engineer at Cambridge University in the UK, worked further on designs of Mond and Langer. He replaced the platinum electrodes with less expensive nickel gauze and substituted the sulphuric acid electrolyte for alkaline potassium hydroxide (less corrosive to the electrodes). This was in essence the first alkaline fuel cell (AFC) and was called the Bacon Cell. It took Bacon another 27 years to demonstrate a machine capable of producing 5 kW of power, enough to power a welding machine. At about the same time the first fuel cell powered vehicle was demonstrated.

Much later fuel cells were by NASA in the 1960s for the Apollo space missions. Fuel cells have been used for more than 100 missions in NASA spacecraft. Fuel cells are also used in submarines.

The lifting agent for the ill fated Hindenberg ballooon was hydrogen rather than the safer helium. The image below is the scene probably in a way you have not seen it before. This is a "ray-traced" image reproduced with the permission of Johannes Ewers, the artist, who won first place with this image in the March/April 1999 Internet Raytracing Competition. For details of ray-tracing you can't beat the POV-Ray site. 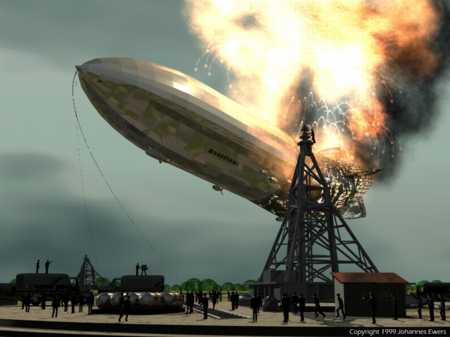