A yellow glass containing more than 1% uranium oxide dating back to 79 AD was found near Naples in Italy. Klaproth recognized an unknown element in pitchblende and attempted to isolate the metal in 1789. He named the element for the planet uranus which had just been discovered. However, uranium metal itself was first isolated in 1841 by Eugene-Melchoir Peligot, who reduced the anhydrous chloride UCl4 with potassium. The radioactive nature of uranium was not appreciated for another 55 years when in 1896 Henri Becquerel detected its radioactivity.

Uranium gives interesting yellow and green colours and fluorescence effects when included to glass in conjunction with other additives. The image below is a shows flower holders made by Burtles, Tate & Co. (England, 1885) showing a characteristic yellow-green colour. The image is reproduced with the permission of Ken Tomabechi at the Uranium Glass Gallery in Japan, where you can find further information about uranium glass. This type of glass is sometimes referred to as "vaseline glass" in the UK and USA and as "Annagelb" (yellow) or "Annagruen" (green) in Germany. 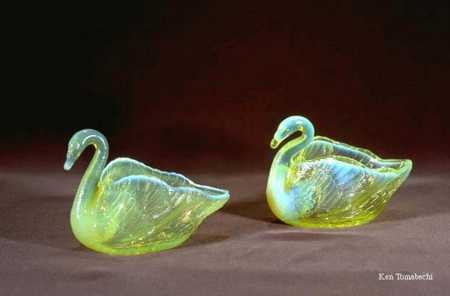