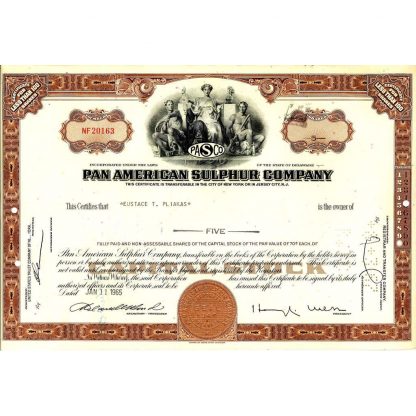 Here is a chance to own a little of America’s history. This attractive and historic engraved cancelled capital stock certificate is associated with the Pan American Sulphur Company and was printed by the American Banknote Company.

Here is a chance to own a little of America’s history. This attractive and historic engraved cancelled capital stock certificate is associated with the Pan American Sulphur Company and was printed by the American Banknote Company. It is genuine and has an ornate border and a vignette of a woman on a throne flanked by two male figures with a sledge and a pick. It shows printed signatures of the company’s officers.

Note the spelling of sulphur in the company’s name. Jubal Richard Parten (1896-1992) was born at Madisonville, Texas, USA, and was the sixth of eleven children of one of the pioneer families of Madison County. He was a pioneer of the American oil industry and was involved in the fight against attempts by Roosevelt’s administration to impose federal regulations on the production of crude oil. In 1945 President Truman appointed Parten chief of staff of the US delegation to the Allied War Reparations Commission. He and several other prominent Dallas businessmen created the Pan American Sulphur Company of Mexico in 1947, a business in which Parten was active until its liquidation in 1976. Under his chairmanship, the Pan American Sulphur Company developed and operated at J‡ltipan (Vera Cruz, Mexico) and was one of North America’s most prolific and profitable sulphur (sulfur) mines.

The Pan American Sulphur Company developed into a major international company active in European and North American markets. The certificates charm is that they are used. No two are exactly the same, with the backs often bearing a number of official stamps. The certificates are all cancelled and the dates on the certificate vary. They have no intrinsic value, but they do look great framed! You might like to mount your certificate in a mahogany frame but a light wood works as well. Each certificate is 12 x 8 inches (about 30.5 x 20.3 cm). We have not provided a frame so as to keep the weight down for posting.

You can choose green certificates (each for 100 shares, see related item link below), or brown (each for some number less than 100 shares). Certificates are shipped in a cardboard lined envelope to prevent damage during transit. 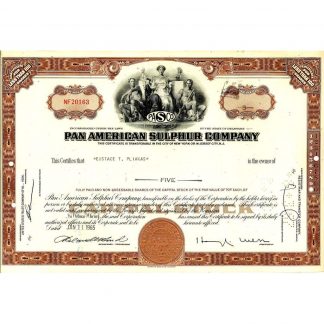 You're viewing: Pan American Sulphur Company capital stock certificate (brown) $7.94
Add to cart
We use harmless cookies to ensure that our chemistry shop works properly for you. If you continue to use this site we assume that you are happy with that.OK, got that