by WebElements: the periodic table on the web

This article addresses the periodicity displayed by the Group 14 elements but excluding, largely, ununquadium (element 114) about which virtually nothing is known. One could predict the properties of ununquadium based upno those of the higher elements and this is left as an exercise for the reader.

Nature of the elements

Carbon often forms multiple bonds, both with itself (as in ethene and ethyne) and with other elements such as oxygen (as in carbon dioxide and ketones). In contrast, silicon, germanium, and tin only form analogues of ethene (albeit non-planar) when the elements possess bulky substituents. While the C=C π-bond formed through the overlap of C 2p-orbitals is strong, those lower down the group are much less strong. This also explains why graphite is stable while there are no analogues of graphite lower down the group. Carbon dioxide, CO2, possesses two carbon-oxygen double bonds (O=C=O) while the corresponding silicon dioxide, SiO2, possesses an extended lattice structure. This is because the π-bond formed through the overlap of p-orbitals on carbon and oxygen is strong as the overlap is favourable, while lower down the group the π-overlap is less efficient.

The hydrides MX4 are known for all the elements except ununquadium although the lead compound (plumbane, PbH4) is poorly characterized. Each is a covalent molecule. The parent hydride for carbon is methane, CH4, and there is an extensive range of compounds called alkanes of the type CnH2n+2 (methane, ethane, propane, butane….). There are relatively few of the corresponding silicon hydrides (silanes) and they are spontaneously flammable. The germane GeH4 is known while the stannane SnH4, a colourless gas, decomposes to tin at about 0°C.

Two types of halide for this group are known: MX2 and MX4. The M(IV) halides dominate the top of the group while the M(II) halides dominate at the bottom. All the M(IV) halides MX4 (M = C, Si, Ge; X = F, Cl, Br, I) are all known for the three elements carbon, silicon, and germanium at the top of the group. However, as the group is descended, the stability of the M(II) state increases relative to the M(IV) state. None of the dihalides MX2 exist independently for carbon or silicon while most of the divalent halides MX2 are known for germanium in addition to the germanium tetrahalides. At the bottom of the group the most stable lead halides are PbX2 and the only known tetrahalide seems to be PbCl4 (this decomposes exothermically to PbCl2 and chlorine gas). 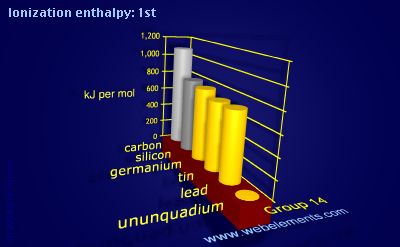 Plot of the Group 14 ionization energies.

Plot of the Group 14 atomic radii

Plot of the Group 14 melting points.

Plot of the Group 14 boiling points.

Boiling point of the hydride

We use cookies to ensure that our Chemistry Nexus site works properly for you. If you continue to use our site we assume that you are happy with that.I U.Nd.Er.S.Ta.Nd