Gold is not a necessary trace element for living things and neither are any of the other third row d-block elements. In part this may be because there is little gold in the biosphere with which living things might experiment and also because there are few ways for living things to convert gold into a suitable soluble form. There do seem to be a few plants that accumulate gold, perhaps because they are associated with microorganisms containing particular amino acids that complex gold.

Given the fascination of people for gold it is not surprising that people experimented with gold for medical treatments. In the 8th century alchemists attempted to prepare elixirs from metallic gold. These were supposed to cure all diseases as well as conferring eternal youth. In the 13th century gold was disolved in aqua regia and the resultant mixture mixed with oil of rosemary or other "essential oils" to form aurum potabile. This was said to cure leprosy. Following this gold treatments were often often used for any number of conditions but with little evidence that they actually worked. Things started to get a little more interesting in the 1890s when it was found that the gold cyanide salt K[Au(CN)2] killed the microorganism responsible for tuberculosis. This was used to treat tuberculosis but, perhaps unsurprisingly, with considerable toxicity problems.

After the first world war gold thiol drugs were developed. These are Au(I) complexes such as sodium aurothiosulphate ("Sanocrysin"), sodium aurothiomalate ("Myocrisin"), and aurothioglucose ("Solganal-B-oleosum"). These are less toxic than K[Au(CN)2] but eventually fell out of favour. However sodium aurothiosulphate and aurothioglucose ("Solganal-B-oleosum") are in use today for the treatment of rheumatoid arthritis following successful drug trials. Some patients do suffer side effects.

More recently gold phosphine complexes of the type [AuX(PR3)] (X = halide, R = alkyl) were tested for anti-inflammatory effects. They possess the advantage that they may be taken orally whereas earlier drugs such as sodium aurothiomalate must be injected. The gold phosphine drugs seem less toxic to the kidneys and the best therapeutic effect is observed for [AuCl(PEt3)].

Other drugs that perhaps have anti-inflammatory effects include Au{(SCH(CH2CO2H)(CO2H)}(PR3)] (R = alkyl, alkoxy, phenyl).

The gold isotope 198Au is used for treating cancer and other conditions.

The abundances of the elements in humans.

How much gold is in your body? Find out here.

You can use this form to calculate how much gold your body contains. Enter your weight in either kilograms or pounds and click the "Calculate" button. You must enter a number, not text! Elements for which there are no data will always give a value of zero for the weight, no matter what you put in the weight box.

Hazards and risks associated with gold:

gold is not absorbed well by the body and its compounds are not normally particularly toxic. Up to 50% of arthritic patients treated with gold-containing drugs (see above) may show toxic effects however resulting in damage to the liver and to the kidneys.

While may associate toxicity with heavy metals, gold is certainly heavy, but is not particularly toxic as the metal. Indded it is present in small gold flakes in drinks such as Goldschläger (see image) and Goldwasser. Indeeed, gold is approved in the EU as a food additive and is assigned an "E-number" (gold: E175). 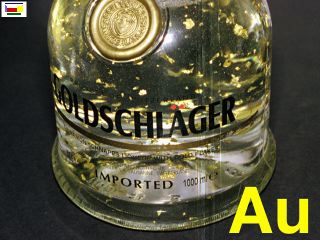 The gold isotope 198Au is used for treating cancer and other conditions. In the form of a gold colloid, 198Au has a diagnostic use for liver imaging and a therapeutic use in treatment of widespread abdominal carcinomatosis with ascites; carcinomatosis of pleura with effusion; lymphomas; interstitially in metastatic tumour. While there is a certain risk from the β-decay of 198Au the calculation is that the benefits outweight the risks.